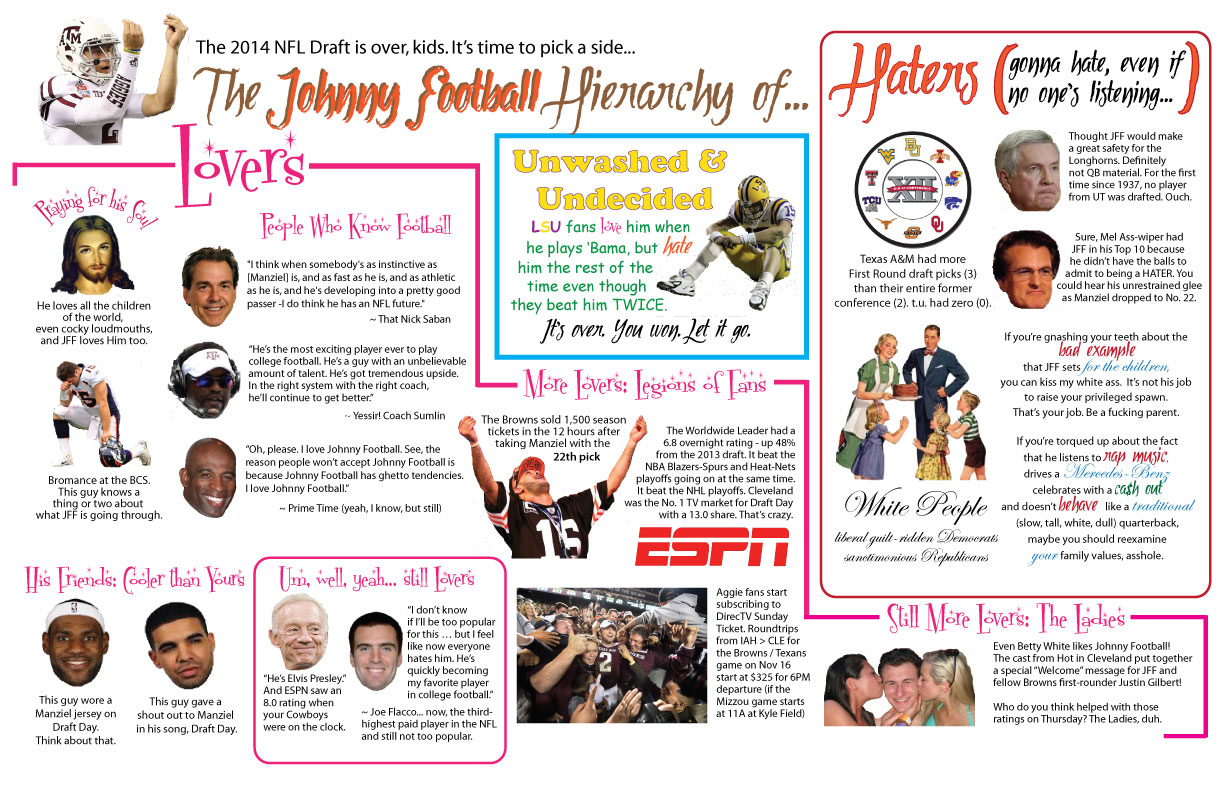 With the 22th pick of the 2014 NFL Draft, the Cleveland Browns selected the most insanely talented, over-rated, over-performing, over-hyped, most likely to succeed, least sportsmanlike, most marketable, least classy, most electrifying player in the known universe: Johnny (Fucking Football) Manziel!

And the crowd went wild… or wait, they wailed in agony… or they gasped in a paroxysm of orgasm… or they aired their genteel displeasure in panting exasperation… or they rushed to the phones to buy their season tickets… or they pegged their bets for the exact day and time that they could shout their “told ya so’s” from the rooftops when he …

b) is ignominiously cut from the Browns roster after never having completed a pass in 342 attempts and having run for minus-57 yards in his sad, disappointing NFL career

For the record, I love the hell out of him. I love to watch him play. I love to watch him “cash out.” I love to see him celebrate with his teammates… and Drake… and Jessica Biel and Justin Timberlake… and LeBron James… and Megan Fox. After a lifetime of cheering for the Texas Aggies, who used to be the Cleveland Browns of college football, I love the swagger he has bestowed upon my alma mater.

And I hate the haters… every last motherfucking one of you… I am so full of hate for your senseless nonsense, I created a handy JFF Hate Map just so you can determine the level of verbal abuse I’m going to level on your self-righteous ass the next time you commit one of the following violations:

1) Calling him a punk! Hide your kids! Hide your wife! My ears melt from the onslaught of pearl-clutching tut-tuts pouring forth when Johnny Fucking Football – A 21-YEAR-OLD MAN-CHILD – behaves like… a 21-year-old man-child!

Exactly how do you define “punk?” Is it someone who would stalk, assault and strangle a former girlfriend? Drag a young woman down three flights of stairs? Boost some crab legs? Use his notoriety to get out of a rape charge? Deploy racist slurs to bully a teammate? Goodness gracious, if that’s not the epitome of punk-i-tude… well, I declare!

For the record, in the summer of 2012, prior to his – ahem – Heisman Trophy-winning season, Johnny Fucking Football got in a bar fight and showed the police his fake ID (admittedly dumb, but how many of us had fake IDs in college? Anyone? Anyone? How many of us drank in bars? My hand is up). He went on to sign his autograph for money, which exposed his NCAA overlords for the exploitative hypocrites that they are.  (By the way, signing autographs for money is something Olympic athletes on college campuses can do without penalty. Does the NCAA believe it owns the rights to one’s own name? That’s what their lawyers argued – while they simultaneously posited that impoverished, hungry student-athletes would be in violation of their arbitrary rules if they accepted  free food. The NCAA would rather they go to bed without supper, just so the NCAA can keep hiding behind its fig-leaf of amateurish bullshit).

On top of all this, JFF then talked some smack to competitors at a football game.

OH. MY. GOD. Think of the children! What an heinous display of unsportsmanlike behavior! What is this world coming to? An athlete… talking trash… on the field of sport… when sports-entertainment networks repeatedly show highlight reels of victory dances and vicious hits. I’m shocked! Shocked, I say!

I think I might have the vapors – especially after, as a sportswriter who covered high school athletics for seven years, I saw my fair share of parents screaming at their children (and other people’s children) until the tears flowed like the torrents that now fall for the inexorable harm that Johnny Fucking Football is causing The Impressionable Youth of America. Heavens to Betsy! WE’RE ALL GONNA DIE!!!!!!

2) Self-Appointing Yourself an Arbiter of Sport – Um, yeah, remember the Simms boy? Big, white, (slow), prototypical quarterback? By now, even my mother-in-law has heard that, at 5-foot-11, Johnny Manziel does not fit the measurements of the prototypical NFL quarterback. Nor does abide by the secret handshakes and unwritten codes of behavior for their oh-so-elite club (even though he’s a scratch golfer). He bails out of the pocket. He doesn’t check to his third and fourth receivers. He tries to save every play (and often succeeds in spectacular fashion). He eats too much kale. He drives a Mercedes. He hangs out with Drake. No, he doesn’t fit the stereotype of a prototypical NFL quarterback… nor does he fit the stereotype of your tired, packaged, run-of-the-mill sports cliches.

Manziel is not “a poor minority pulling himself out of the ghetto by his physical abilities through the cleansing brothel of NCAA sports.” Manziel comes from money: The Manziels may not be in the Top 2%, but they probably clear the Top 5, long before he even signs his first pro contract. People can’t put him in the “poor athlete box” so I guess they’re left with the “tragi-comedy that is Lindsay Lohan” box or the “poor Miley Cyrus road to ruin” box … or the, what? Chelsea Clinton consolation prize?

I think he makes people uncomfortable. I’m sure he makes them jealous: He’s a rich, good-looking, talented young man with charm to spare. That’s an awfully nice package compared to the scrawny, pimply-faced dullard that sprang from your loins batting .128 with a free-throw percentage in the sub-Shaq range.

And as a rich, good-looking, talented young man with charm to spare, it’s clear (at least in the comments sections of most internet stories about him) that Manziel doesn’t fit some people’s ideas of how (white) people should behave. He likes to party… which, come to think of it, most 21-year-old (white) American males like to do. They just don’t have the opportunities that Manziel does.

How you feel (and how I feel) about Johnny Manziel’s behavior says more about ALL OF US than it says about him – and your smug judgements sure as hell aren’t going to reform him into a 6-foot-4 (white) savior with perfect mechanics, outstanding speed and agility, and a penchant for drinking a cold glass of milk before his 8:30 nightly bedtime. Hell, he probably won’t even Tebow after his first touchdown. Your well-intentioned (and oh-so-unsolicited) advice isn’t going to shrink the chip on his shoulder, either. Quite the contrary.

Your self-righteous preaching only betrays you as being gullible enough to be sucked into the maw of the sports-entertainment machine – the very same machine that manufactured, built up and spit out Tim Tebow. Remember him? Great white hope? A perfect, angelic foil to Manziel’s mythic devil?

Manziel and Tebow* are two sides of the same coin. They’re storylines, concocted by media machines wanting to drum up clicks, links, ratings, viewers and readers so they can sell more advertising. Shocker! No different than a Disney princess movie – only possibly a lot more exciting. There is a hero (Tebow / AJ McCarron); there is a villain (Honey Badger / Manziel); there’s usually a goofy sidekick or two (Les Miles / LeBron James); and a very catchy song (Draft Day by Drake, natch, but be careful clicking that link, it’s explicit.)

Want to peek behind the curtain of that storyline? There ain’t no wizard, friends, but there’s this: ESPN pulled a 6.1 overnight rating for the first round of the NFL Draft on Thursday – a 60% increase over last year’s broadcast and a veritable butt-whipping of perennial Thursday powerhouse, The Big Bang Theory, which posted its lowest ratings of the season (when Penny and Leonard officially got engaged! Spoiler alert!). Advertising 101: Rating ultimately determine the rates you can charge your advertisers. Wonder how much a :30 will sell for in the 2015 Draft… I can assure you, the ratings won’t be as high.

That same Draft night, Manziel was mentioned in 5.2% of all Tweets in the United States, according to an analysis by Emory University. (How cool is that job?) The largest spike in Twitter activity occurred when the Browns picked Manziel with the 22th pick.

Someone, somewhere is cashing out. Might as well be Johnny Football. More power to him.

But, just in case you’re still confused, I built the handy hate map so you can decide where you fall on the spectrum: You might be one who refuses to watch lest your delicate sensibilities wither in the bright light of (shudder) REALITY or you might just become a huge-assed Browns fan (and send your kids to Texas A&M) or you might not even care.

I can assure you: He doesn’t.  He probably just wants to be left alone so he can play football.

*And before you go hating on me for hating on Tebow, remember: I don’t hate Tebow. I think he’d make a great fullback. He certainly wouldn’t be a starting quarterback in today’s SEC (one that was transformed in 2012 by the first 7,000+ yard offense – Texas A&M – led by one Johnny Manziel). I hate the media machine that transformed Tebow into a caricature of himself.

This site uses Akismet to reduce spam. Learn how your comment data is processed.