Having seen and survived the Great American Eclipse and subsequent Great Apocalyptic Traffic Jam, I am reminded anew why there’s no one else on earth that I’d rather spend my time with than Patrick Bertinelli.

So much so, that I was inspired to write a song about our recent adventure (see below).

But first, a recap: We decided at the last minute (37 days out) to witness the first total solar eclipse in the continental United States in 38 years. Based on factors ranging from our dog sitters being in Oregon for the eclipse to almost all airlines and routes being sold out (plus ridiculous hotel rates), we decided to take the path of adventure: First flight in, last flight out. Take the 5:30 AM to Salt Lake, arrive at 8:05 AM, grab our rental car, drive it like we stole it (which we did) for 217 miles to Idaho Falls, Idaho, and maybe, just maybe, arrive by the 11:33 totality. Then kill an afternoon in the Gem State and fly back to Phoenix on the 8:20 PM.

We agreed to pull off Interstate 15 wherever we could at 11:10, regardless of our bearing on the centerline. The threat of bottleneck traffic made it an adventure, and bonus round: I’d get to cross Idaho off the list of states I’ve visited.

At 11:10, a few miles north of Idaho Falls and well into the path of totality, we pulled onto a country road, drove about a mile, took a right and ended up in front of a freshly mown field, adjacent to three cows.

Patrick set up his cameras. We prepared to conduct our scientific observations, and we monitored the moon’s progress across the sun with our special glasses… and then it happened: The moon blocked out the sun. The bucolic landscape descended into a dusky darkness. Stars sparkled the purple sky. Somewhere farmers and their families shouted and shot off firecrackers in the distance.

Staring gobsmacked at the silvery corona sending its tendrils around the moon, we cheered and embraced and laughed, trying to burn the memory of that magic two minutes on our brains. It was your first kiss, your first glimpse of the Grand Canyon, the birth of your first child… the thrill of all of the magical things we want to cling to and never can quite describe again: Seeing Pat when I walked with my Dad into the chapel with all our friends gathered around to celebrate our union. 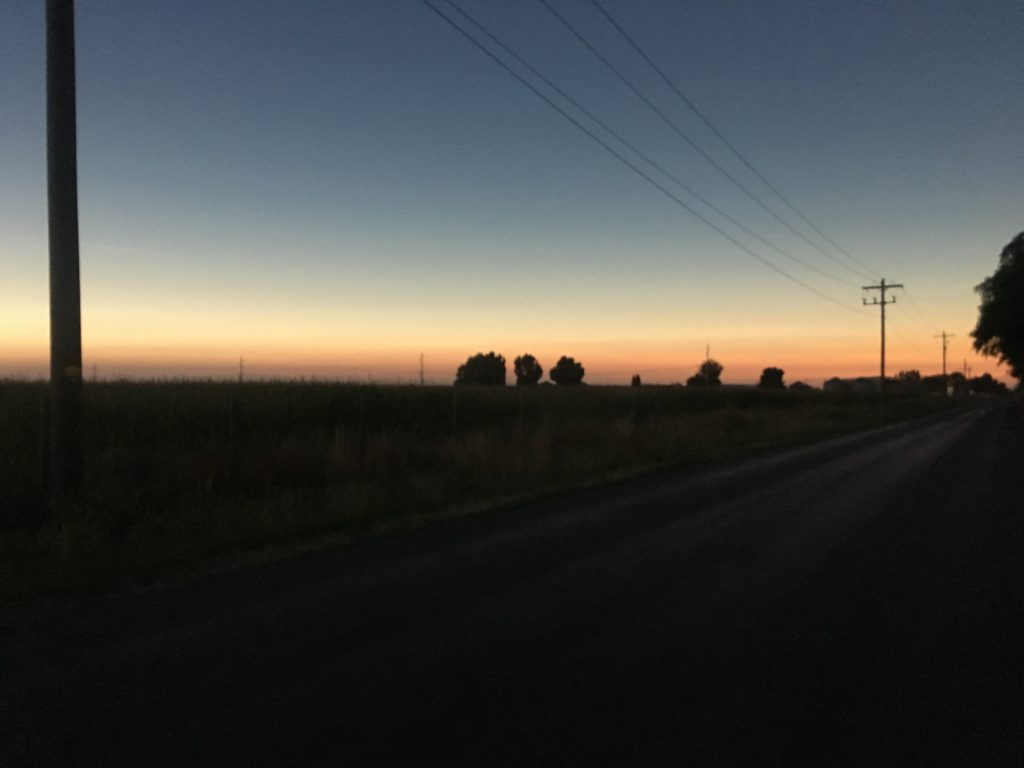 When it was over, we got back in the car with an empty afternoon before us. Three miles into our return, we hit traffic in Idaho Falls, spent an hour traversing four miles, and decided to wait out the rush by grabbing lunch. An hour later, we merged back into a six-hour line of bumper-to-bumper bound for Salt Lake City. The miles crawled by as did our hopes of making the return flight. Siri warned us of our dwindling estimated time of arrival — 6:18, 6:43, 7:12, 7:35, 8:02; 8:35. We canceled at 6 PM when we were still two-and-a-half-hours away.

At 8:35, we rolled into the Luv’s Travel Plaza to fill up. I bought two toothbrushes, a tube of Crest, two liters of water, and a six of Gooseneck IPA. Ten minutes later, we checked into the Mircotel at Salt Lake City International Airport. Exhausted from our seven-plus hour return trip, I didn’t even finish my beer, but we did make the flight at 6:30 the next morning. Thank you, Southwest Airlines app.

The state of Idaho has roughly 1.6 million people in it. Idaho Falls has about 64,000. The Idaho Division of Tourism Development estimated an additional 200,000 people traveled to Eastern Idaho for the eclipse… and they all decided to leave at one time.

The same thing happened to friends in South Carolina, Kentucky, Tennessee and Oregon. After the forced march back from Idaho, I have come to the conclusion that, in the event of an apocalypse (nuclear, zombie or otherwise), the majority of Americans will likely die in traffic because we are the worst drivers in the world (USE YOUR SIGNAL, BUDDY! TAKE YOUR FEET OFF THE GODDAM DASH, IDIOT! TAKE WATER WITH YOU WHENEVER YOU TRAVEL, MORON – oh, wait).

That said, there is no one that I’d rather be stuck in traffic with than Patrick Bertinelli.

And now, I have commemorated our adventure in song. Please enjoy:

We walked in to the airport
Like we were hunting a big eclipse.
Our map zeroed in on the centerline.
Our time, it was an ellipse…
We had one eye on the stopwatch, as
We watched the miles tick by
And all the while schemed
That we’d be there on time
We’d be there on time, and…

Oh y’all made plans several years ago,
And we waited until too late.
Well, you booked your rooms and got your flights set,
While we dragged ass to the gate.
But we still forgot that traffic sucks,
And now we’re all stuck here.
I had a dream there were clouds in the eclipse,
Clouds in the eclipse and

We wanted to take a short vacation,
Just out and back for some fun.
So we flew on Southwest and drove to Idaho Falls
To see the total eclipse of the sun
Well, we made it to the path on time
And when we left, we paused… on Highway 15
in stop-and-go traffic
stop-and-go traffic…

Last Sunday morning, Winslow interrupted our leisurely walk by following her nose into a black, satiny mass that was hiding under a bush.

“What the hell?” Pat said, straining to keep Coolidge from lifting his leg on the mystery object.

“Looks like someone’s panties,” I said, pulling Winslow aside to gingerly pick up the litter. “No, wait. It looks more like a wine bag – like you’d give as a gift.”

I pulled the black satin bag from the prickles and thorns. The interior was a jaunty black-and-white leopard print. Fastened with a satin drawstring with bejeweled ends, its tag read, Sugar Sak™: Protected with Bioshield 75®.

“Maybe it’s a bag to carry your panties? Like on the walk of shame?”

Then I wondered why the bottom of one’s purse wasn’t a suitable vessel? I mean, it’s not like you’re gonna wear them again before putting them in the laundry.

“Wait, there’s something inside,” he said. “Oh… it’s actual panties. There are panties inside.”

END_OF_DOCUMENT_TOKEN_TO_BE_REPLACED

And never I have felt so alive: Lying in a hospital bed, the apheresis machine sucking stem cells from my veins for the better part of a workday. 6 hours, 10 minutes to be exact.

I reported for duty at Mayo Clinic Hospital at 7:15 AM in my favorite, long-sleeved dress-pajamas with my lucky New Orleans Saints Super Bowl Champions T-shirt underneath. They needed ready access to my veins, and I needed a good omen… or three.

END_OF_DOCUMENT_TOKEN_TO_BE_REPLACED

Unfolding from my fetal position among the dogs and husband, today I can feel my thoracic spine, right there at T5. The metacarpal bones of my right hand spent the fretful night reminding me that I am, in fact, right-handed.

This is my life on filgrastim – the stem-cell stimulating drug. I got two shots of it per day for five days leading up to and including the donation – one shot in each chicken wing, among the ample, subcutaneous margins of my triceps.

END_OF_DOCUMENT_TOKEN_TO_BE_REPLACED

We lost a wonderful member of our poker group to cancer in May.

Ray was a man who rode jacks to ruin on more than one occasion. He had this crafty smile that crossed his cheeks whenever he was trying to figure out whether you were bluffing. He grilled a wicked Polish sausage and traded naughty barbs about his own Polish sausage, that resulted in a good laugh and a little blushing.

Old men are allowed do that, especially around the card table.

So when I learned of his passing, I called some of the players and proposed an idea that I’d seen on The Wire.